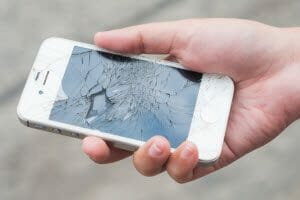 Who knew a broken Galaxy S6 could be the source of so many crazy stories? Of course, we’ve all had problems with a mobile phone or two in the past, from dropping it on the floor to getting it soaking wet in a sudden downpour, but some of us have damaged our phones in far more peculiar ways. The following stories are actual insurance claims from real people, and they are sure to bring you a laugh or two. They might also make you feel a little better if you are dealing with your own bizarre story about a broken Galaxy S6.

1. A farmer claimed his phone had disappeared inside the back end of one of his cows when he had been using the flashlight on his phone while assisting the cow during calving. The phone was found later, but it was damaged.

2. A women baked her phone into a sponge cake she was making for her daughters birthday. The phone didn’t withstand the heat.

3. A seagull swooped down and took a woman’s phone from her hand.

4. A man was filming monkeys from his car window and the monkey climbed on the roof and stole his phone.

5. A couple was re-enacting the “I’m King of the World” scene from Titanic and lost their phone over the side of the cruise ship while trying to take a selfie.

6. A pyro technician was setting up a show and left his phone within the “blast zone.” Unfortunately, it was nowhere to be found when he returned post-show, because it had been fired 3,000 feet into the air before exploding in a stunning display.

7. A woman threw her phone at her boyfriend in anger, but missed him and hit a wall and shattered the device. Ouch!

8. Rather than pay the price to attend a show, a man tried to film the event from up on a nearby tree. He apparently got a little excited when the band came on stage and dropped his phone on the concrete below. Splat!

Here’s our advice on your broken Galaxy phone:

At North Georgia Cell Phone Repair, our best professional advice would be to just use your phone as a phone…and not as an ingredient in a cake, or a firework for that matter! No matter what the cause or how bizarre the circumstance might be, if you do have a broken Galaxy S6 you should find a repair technician who is qualified to repair Samsung products.

It’s a good idea to use a shop that is experienced with Samsung repairs and has a good reputation. An unskilled repair person could cause additional damage to the body or interior electronics of your Galaxy S6, which will cause more problems. A qualified independent repair shop will have technicians with expert knowledge, which enables them to perform repairs quickly and efficiently.

You can rely on North Georgia Cell Phone Repair to give you an honest and professional assessment for all of your Galaxy S6 repair needs. Call 770-569-2202 a free estimate for your broken Galaxy S6 repair.

Facebook
Previous Post
How to Use Parental Controls for iPhones and iPads
Next Post
Does a Broken iPhone Charging Port Mean the End of the Road for My Phone?