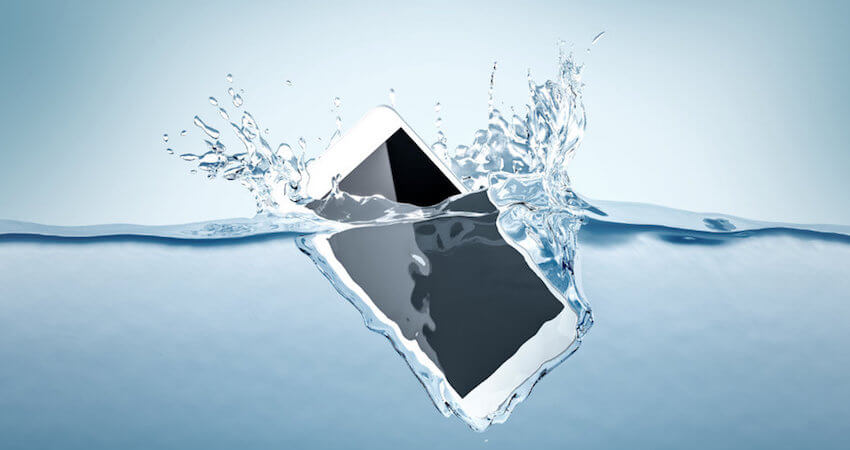 There is a lot of misinformation out there today regarding how to fix water damaged phones and how you should handle your electronics when the damage occurs. Unfortunately, most people do the all the wrong things to their cell phones in the critical hours right after the incident happens.

Speed is the Key to Water Damage Repairs

A water damaged phone can end up suffering from a couple of major problems:

1. Because water and electricity don’t play particularly well together, the water in the phone may cause permanent damage to various electrical components.

2. A much more common problem is corrosion. This damage isn’t immediately visible. In fact, it’s quite common for a phone to initially work after it’s been dropped in water and dried out. Then 2, 3, or 4 weeks in the future the phone stops working. This is because the moisture in the phone isn’t really gone. It’s trapped inside and corroding the metal. Think of it like rust on a car. It doesn’t happen all at once but rather over time. It’s the same thing with a wet phone. And once the corrosion has hit a certain level, it starts to short out connections on the phone’s motherboard, which can spell disaster for your cell phone.

How Can You Stop the Problems with a Water Damaged Phone?

There are two primary ways to deal with your water damaged phone. First, stop the electric current from coursing through the phone. On a non-iPhone this is simple – remove the battery immediately. This is a lot harder to do with an iPhone because special tools are required to remove the battery, so it is best to just turn it off right away. It’s not as good as removing the battery, but better than leaving the phone on.

Another helpful tip: Don’t plug the phone into a charger. That’s the cell phone equivalent of giving a hyperactive 10 year-old a bag of Pixie Stix right before church. Fire and brimstone may rain down.

Next up, you need to remove 100% of the moisture from the phone before corrosion gets started. Unfortunately, truly drying your phone out isn’t something most people can do at home. Putting your phone in a bag of rice or hitting it with a hair dryer (two common suggestions) aren’t really the solutions. Neither one fully dries your phone out. Rice can be particularly bad because of the starch. Starch and water make a nice slurry solution that is not good for your phone’s charging port, headphone jack, or buttons.

When Do You Need a Cell Phone Repair Store?

Even if you remove the phone’s battery or think you have dried out the phone sufficiently, it is a good idea to get to a repair store as soon as possible. Make sure the repair store you select uses a heated vacuum chamber to dry the phone out completely. Going to a qualified repair store will give you peace of mind and give your phone its best chance of survival.

Our team at North Georgia Cell Phone Repair offers assessment and repair services for cell phone problems. Need to know more about water damage repair? Click this link or call 770-569-2002 to learn more about your options to fix water damaged phones. We can fix that phone!

Facebook
Previous Post
Do I Need Insurance to Cover Cracked iPad Repair?
Next Post
Tablet Repair: Don’t Attempt To Repair Your Tablet Until You Read This!

How Can We Help You?